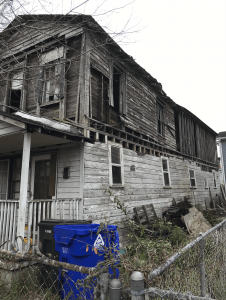 I continued surveying several buildings around town. I have surveyed over 100 buildings in Charleston now. I’ve continued to check for any foundation, roof or structural issues. I’ve also been learning more about the BAR and their role in preservation.

I’ve been working with Kim Hlavin still to finish the survey of the houses around the peninsula. She has given me a list of more places around town to resurvey. Once I have finished the survey. I will be researching the ownership of the houses to find out why the homes are being neglected and if the owners are willing to learn more on ways to restore their homes.

Today, Julie and I had a meeting to discuss creating a brochure that would list the ways in which residents could restore their homes. This would include incentives and resources such as grants and tax programs on a federal, state and local level. Anna Catherine Carroll, Erin Minnigan, and April Wood also joined us at the meeting. This night, I attended a BAR meeting where Julie presented a case for 35 Barre Street to be raised on piers. I was able to see how a BAR meeting is conducted.

This week I learned more about the business side of SOS and preservation. After meeting with several people within the preservation society and Historic Charleston Foundation, I understand more the role everyone plays in preservation. It takes several people among many disciplines in order for a building to be restored. Most of the time, money has to come from incentives or sometimes homes fall into intentional neglect.