Skip to content
Hours: 16       AXP: 16
This week at JMO, I began the milling process for a “fence” component at a length of 108 7/8″ that will later be taken down to final dimension. I began by collecting two quarter poplar that would yield a width of at least 12″. Once I had the boards picked out that would yield this width, I then started the milling process which comprises of; cross-cutting it to 108 7/8″, taking it to the double sided planer and to take it to a thickness of 1-7/8″. From here, I joined an edge of the board before going to the Y-belt sander to further clean up the board and take them down to 1-3/4″ heavy. After this process was complete, I took went back and forth between the shaper and table saw to rip the boards and prepping them in between. I learned, that, when ripping long boards, one must rip at a constant pace to ensure you do damage the work or the blade. 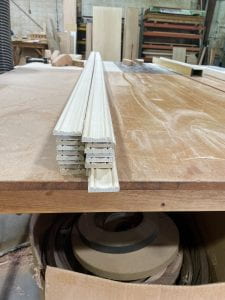