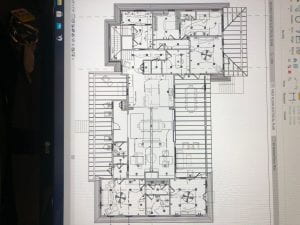 This week I worked on the electrical plans for the Young Residence at Parrot Point in Charleston. This client is very particular in alignment and the one request they had was for it to be as symmetrical as possible.

I learned a lot regarding the symbols used to read an electrical plan and making a readable path from switch to light. In addition, I was able to draw up some options for exposed beams coming across their vaulted ceiling in the living room (this also had to be symmetrical too and was more difficult).

In all, I was intimidated by the thought of electrical in general, but now that I know it is what it is, it’s not too bad.