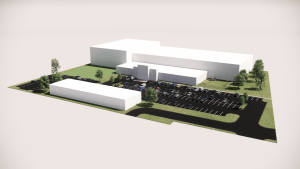 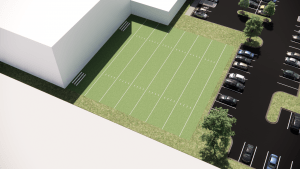 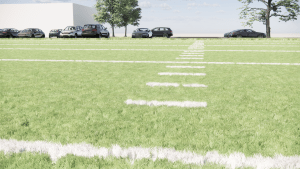 This week I got to kickstart a new project by starting to model the site for an athletic facility. Using ARC-GIS, I researched the site and imported the site survey. The program houses several indoor courts, workout spaces and outdoor turf area as well as a daycare. The goal is to get some drone footage of the site and overlay the rendering over it to show the potential development of the site. I worked on modeling in the parking lot, curbs, sidewalk, landscaping, fencing and playground for the daycare.

My biggest challenge with this task was creating the turf field outside the airplane hangar door. Using Enscape I created the different color grasses to delineate the white lines of the field and to have the turf be a more artificial green color than the rest of the site’s grass. There’s a cool trick where just the word ‘grass’ in the material definition will make it render as flowy blades of grass and other key adjectives such as “tall,” “short,” or “wild” will alter the appearance of the grass. Next week I am going to work on the company’s logo to go on the center of the field while someone else finishes up modeling the building.