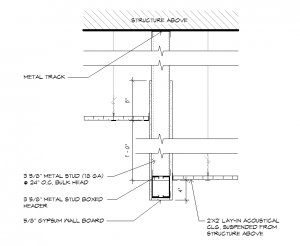 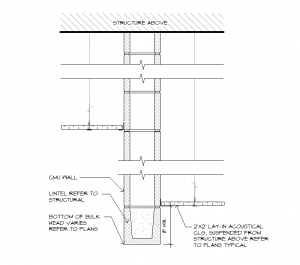 Summary: All for Prototype School Design

I started the week by redoing the render work that I lost last week in the crash. Things went much faster the second time around since I had already created all of my materials. I played around with the settings and created a solar study of how the light moves in the space. We rendered it as still frames every hour during daylight time for an entire year and stitched them together using Photoshop. This study was just for fun to learn more about the software but if this were a sited project it would be used to determine sun screen options. I tried to attach the video clip to this, but the file was too large.

The bulk of this week was spent working on drafting details for the RCP plans. The details were “dumb” and not associated with a specific location because they were replicated several times. Since the prototype school is based off of an existing design from CAD I had a good base and knew what the final image should look like. This was helpful because I struggle with trying to figure out how materials come together. Most of the details I worked on pertained to the relationship of the bulkhead of the wall and the ceiling tiles. I liked drafting in Revit more than CAD because of how easy it was to manipulate scale and line weights.

On Thursday, I started working on the gymnasium render. I had to create the lines on the basketball and volleyball courts as well as figure out how to model the high ceiling in place. I had to create the structural truss for the gym and model in the lights and basketball hoops connected to the grid. I’ll probably finish the render for this next week.