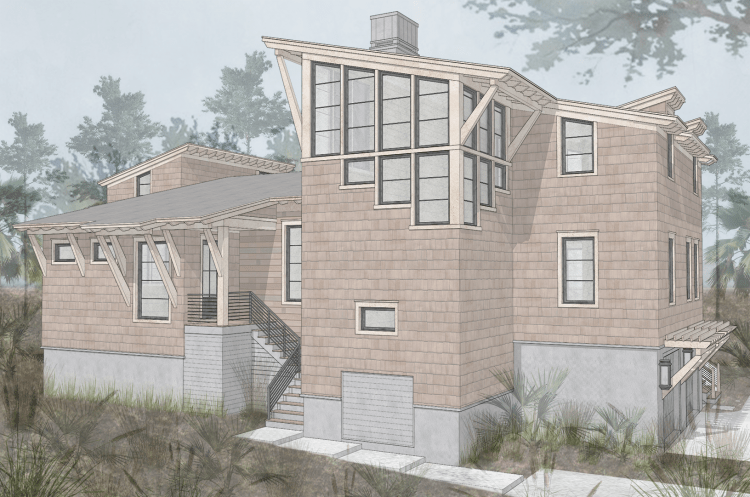 I began my week by finalizing a digital model of a modern house (Goldfarb Residence) that will be located on Kiawah. I then used the model to create perspective views that will be submitted to the ARB. I then rode with my boss Darryl Cobb over to Daniel Island to locate houses that I will be photographing for him in the near future.

Today I jumped back into the 3D model for the Goldfarb Residence and began to add materiality for a future render. I also watched tutorials on Lumion because it would be the program I plan to use to create renderings to use in advertising our firm. Once Lumion downloaded I imported the model and played around with the settings to try and recreate what Darryl was looking for in the render’s style.

After discussing with Darryl in greater depth the style of the render that he wanted to be created, I did some more research online to understand the best way to create a watercolor rendering as efficiently as possible. I decided to drop the attempt at Lumion and focus my efforts instead on simply using Sketchup to produce the base image for the render. I spent a majority of the day adding watercolor washes to various textures in photoshop and then using them in the Sketchup model. At one point, John Goldfarb came in for a meeting and I got to show him the 3D model so that he could have an easier time visualizing his future residence.

I drove out to Kiawah with Darryl to do measurements for an as built that I will be working on in the near future. We will be remodeling the front entry and rear entry of the house. We went through the typical method of sketching out plans and elevations and then taking measurements. After we were finished, we visited a few sites around Kiawah to look at some in in progress and completed projects that Cobb Architects were responsible for.

This week was a serious week of learning a new technique for creating rendered scenes. In the past, I have produced solely photorealistic renderings and had never taken a more abstract approach to them. Although trying to learn something completely foreign to me was frustrating at first, one I began to understand the technique better, it became as enjoyable to do as my typical rendering technique.