I worked on adding details to the model today such as light fixtures, outdoor furniture, and plants.  I also re-evaluated the material choices, and edited those on Podium.  I have really learned how much time and effort goes in to rendering.  It’s not at all just the click of a button.

Well, I began working Tuesday and my computer started having issues.  It would barely let me open SketchUp before crashing.  I went through the process of updating systems, uninstalling/reinstalling, etc., but it was still a lag.  Wednesday I took it to be looked at, as it seemed as more of SketchUp than my computer, once it was updated.  I had previously passed the model to an interior designer at Herlong, where she would begin some more color studies, as this is a spec house and needs to appeal to everyone, but at the same time be unique.  We met over zoom and I was able to walk her through renders.

Finally, my computer is working, even though SketchUp is running extremely slow.  (But…at least it’s opening!)  I had a zoom meeting with Steve about some of the decisions reached on color choices and some details within the railing, etc.  I finished a render of the rear elevation, which turned out nicely.  I also worked on two renders using different colors and materials of the front of the house.  We passed it along to the clients and expect to hear back from them over the weekend.

Weekly Lessons Learned: This week I learned that sometimes things unexpected happen in architecture, like a computer program crashing.  As frustrating as it was, I was still able to accomplish other things while that was being fixed, like a few meetings and researching things that could help with the process.  While it did throw a curveball in my plans, I was able to bear down once everything was pretty much resolved and resume my work. 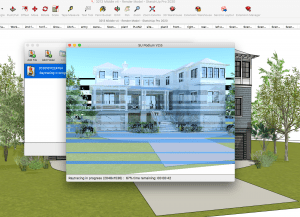