Monday: I finished up my part on the RFQ and began working on another RFQ.

Tuesday: I created new 330 forms for projects to include in the new RFQ as well as updated our list of project forms to pull from for future RFQs

Wednesday:  I spoke with our preservation consultant about responding to the notes on the HSR draft that we received from the NPS. I also began working on adjusting the formatting to more align with the comments to be ready when more revisions come in from the consultants.

Thursday:  I continued working on 330 forms for the RFQs 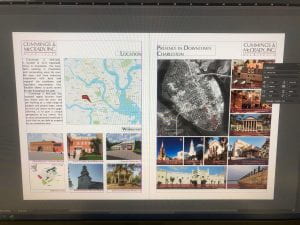 Role of Student: Assemble the documents required for the specific requests and format the submittal.

Lessons Learned: It has been interesting working on the RFQs, specifically one for the city and a Berkeley County Schools.  This was an area with which I was unfamiliar, so I learned a lot about the practical and paperwork side of practice. I prepared the drafts then would go over them with Ben so that I could make changes based on a standard I didn’t know or a convention of Cummings & McCrady.  I felt this really helped me understand how the firm works when not specifically in the middle of a project.