This week I worked on mostly created a site plan for the Rita Hollings Science Center located on College of Charleston’s campus. The learned how to be patient because I was not familiar with the project so I had to quickly learn the site in less than a week in order to put a site plan together. I also learned a little more in Revit when I was calculating square footages for the fire stations. Below is a roughly printed site plan I made and eventually made many changes to later in the week. 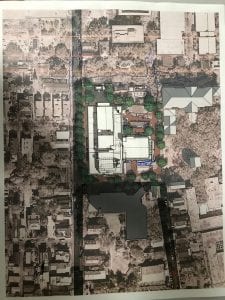